"Calé creates an intimate relationship with their audience, connecting almost immediately with deep, guarded places in the soul. The origin of their Latin-fusion music, shaped and re-shaped through generations, is from Spanish-Arabic, North African and Romany regions.

Their first Cd is “Vente Conmigo” which captures a broad range of human experience, from the brazen, raw emotion of Quiero to the seductive reverie of Dos Años Atras.

Calé fuses in its components a musical recipe for all music fans from traditional to modern crowds."

After 25 years as the lead singer for Santana, Tony Lindsay has garnered 11 Grammy Awards, traveled on several world tours and recorded on seven CD's including: Milagro(92), Supernatural (99), Shaman (02), Food For Thought (04), Ultimate Santana (07) and Multi-Dimensional Warrior (08).

His full-bodied tenor voice and unique style have paved the way for his participation in a variety of musical projects, including a 1993 duet performance with Angela Bofill and the New York Philharmonic Orchestra at Avery Fischer Hall in NY. A resident of the Bay Area he has often performed the Naitonal Anthem for the Warriors (NBA), 49'ers (NFL), Giants (MLB) and Sharks (MLH).

Leo Herrera and the artists from Caravanserai are among the few that can hold up their end of the bargain when it comes to the music of Santana. Leo's commitment to excellence in replicating the sound and style is second to none.

This year the guys will be bringing Tony Lindsay from the Bay Area. A truely unique opportunity for us in Mammoth. Much thanks to Leo and Tony for visiting our little slice of paradise! 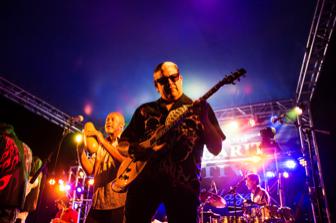